The ALOS-2 data, etc., to be distributed is distinguished by its usefulness for many applications, including prompt and detailed grasping of the situation in natural disasters, grasping of the situation in ground subsidence, monitoring of sea ice, and exploration for resources. This project is being conducted as part of a larger project of operation of ALOS-2 and general distribution of observation data, as entrusted to the two companies by the Japan Aerospace Exploration Agency (hereafter “JAXA”). The intent is to further the expansion of the utilization of the ALOS-2 data, etc.

(*1) Advanced Land Observing Satellite (Daichi/ALOS): A Japanese Earth observation satellite operated from January 2006 to May 2011, performed high-precision global observations and have contributed to creation and updating of maps, grasping of situations for disasters, observation of local environments, etc. Of the three sensors installed on ALOS in this project, the data from the Panchromatic Remote-sensing Instrument for Stereo Mapping (PRISM) sensor is to be sold. 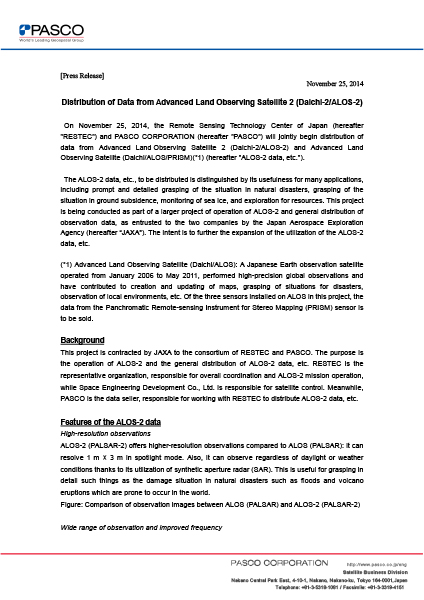